Tentative Grooming and Trail Info for the week of March 28th Independence Mine is the best place to ski in the world right now!

If you haven’t heard the news, Independence Mine is the “No.1 best place to ski in the world” according to the ADN.  Click here to read the article that shares some rave reviews about the ski trails at the Mine.  Yesterday was a picture perfect day up there and the grooming exceptional!  Every single person on the trails smiling from ear to ear!  It is always exciting to share early grooming news with friends near and far to hear their reaction.  Having these beautiful ski trails in our back yard is truly a gift to be thankful for.  Our groomers are some amazing volunteers! We will gather on some Thursday evenings in August at the ski club shed at GPRA to do trail work, from 6:30 to 8:30. CLICK HERE to sign up. Directions to the work sites will be posted on the shed for late arrivals. Mostly rock tossing, shoveling, raking, brush lopping, tree planting. Bring work gloves, and maybe a shovel or loppers or bow rake. 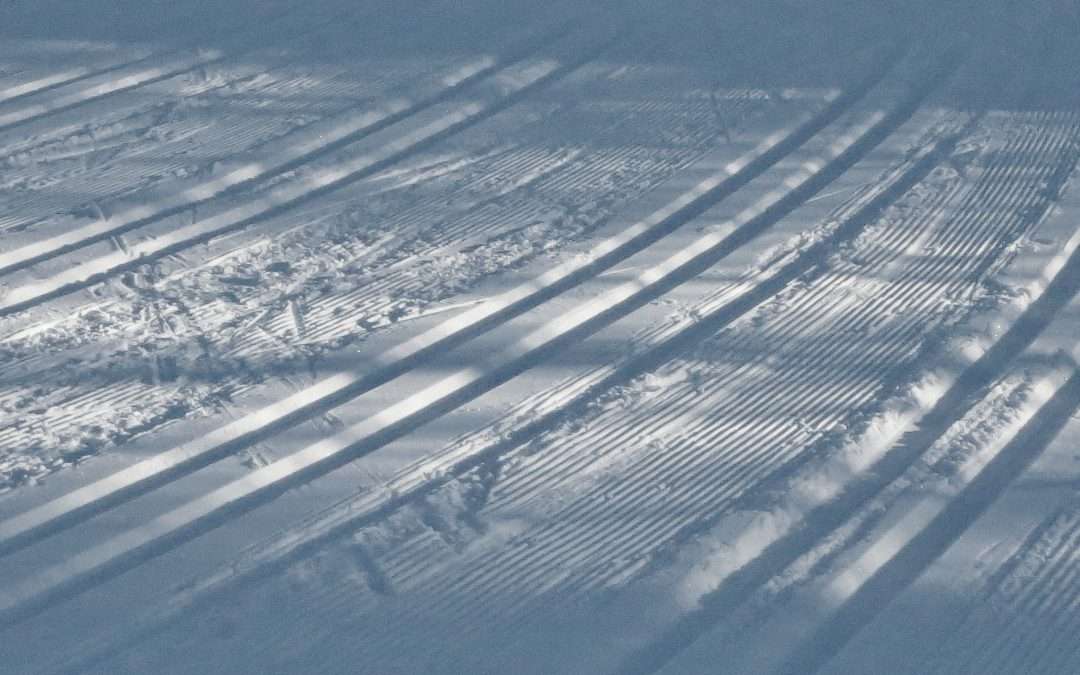 This was a solid winter with no trail-closing winter warmup at GPRA. A large wet storm cycle at the beginning of April produced historic-scale road-closing avalanches at Hatcher Pass. The Hatcher Pass road was closed for ten days in early April. The avalanches paused Independence Mine grooming and brought Archangel Road grooming to an early end – we did not resume grooming at Archangel after the road opened, as it was deeply buried in debris. Grooming hours increased at the Moose Range and decreased at Independence (by 50%), relative to last year.

Nordic ski Grooming ends for season on May 22nd.

Well, it finally happened. Flowers are blooming and people are boating. And the Mat-Su Ski Club closed out the 2020-21 ski season with a final groom of the Independence Mine Nordic trails on May 22nd. Still plenty of snow up at Hatcher Pass, but it is pretty smooshy. See you next season! And hopefully before then, because we have a lot of trail work to do this summer! We are now grooming only at Independence Mine, where we plan to have fresh grooming on Wednesday and Saturday mornings, and maybe Sunday mornings too. We will continue until State Parks plows the snow away, sometime in the second half of May. Hatcher Pass and the Independence bowl are still buried in snow: there is a ton of skiing left up there. Ski conditions vary with time of day. The melt-freeze crust is approximately strong enough to support a moose on a pogo stick.

Government Peak Recreation Area was last groomed on April 21st (with the PistenBully) and skiing was just fantastic for 3 or 4 days after that.  After that conditions decayed with the rapid onset of spring. Still, non-ridiculous good skiing, with lots of butterflys, spring birdsong, and sunshine lasted until the very end of April at GPRA.

Archangel Road grooming was halted in late March by the big snow storm and avalanche cycle and long road closure. That ended our Archangel grooming season for the year, as it turned out. But in early May, the Archangel Road is still deeply snow covered, and folks are still skiing there.

The crew of volunteer groomers have since October 19th contributed 1266 hours of effort this season packing, dragging, and tilling the trails to bring you fresh corduroy and classic tracks at Independence Mine, Archangel Road, Government Peak Recreation Area, and the Moose Range. 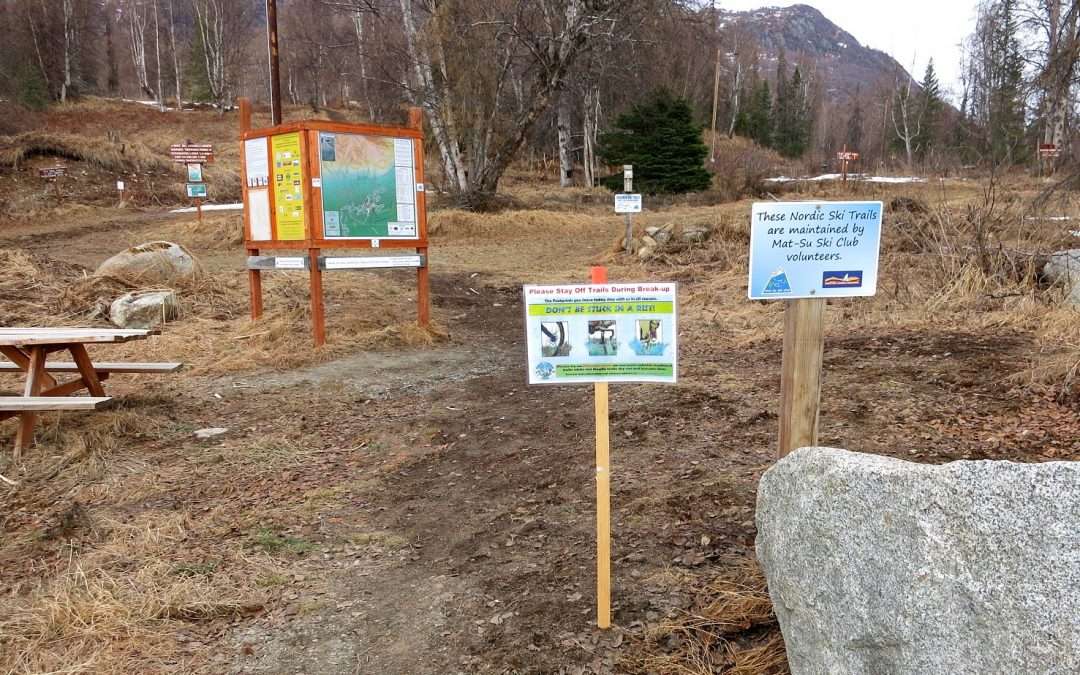 The Mat-Su Borough is asking trail users to stay off and not damage the GPRA Nordic ski and bike trails during breakup. Trails are now partially snow-covered, partially wet grass, partially sink-in soft, with frost blossoms. Please don’t use the Nordic ski or bike trails right now if it leaves ruts or footholes. 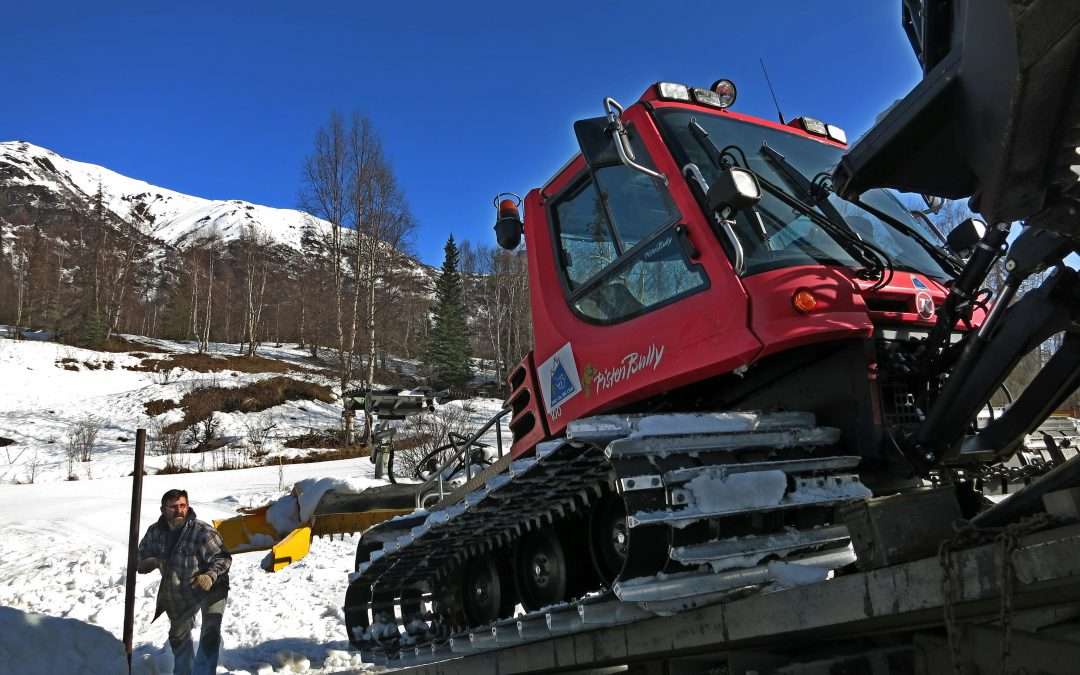 The PistenBulley has decamped GPRA for the loftier trails at Independence Mine.

The PB left behind beautifully groomed 100% snow covered trails at Government Peak. The Club will continue to groom GPRA (with the XMRs) for however many days (weeks?) are left. Skiing is still great there, depending on time of day.

Independence Mine trails got packed in today with the PB; they should be perfect by Saturday, our official grand Independence reopening after the weeks-long Hatcher Pass road closure following storms and avalanches. Our groomers packed the trails today and will groom tomorrow. We expect to be grooming at Independence until sometime in mid-May. Also – crust skiing is happening and is prime.

Moose Range trail grooming ended over a week ago; there’s still a tiny bit of skiing opportunity left in the Range.

Archangel Road is on its own – we pulled out our equipment after the highway reopened. Didn’t make sense to try to reestablish the grooming over the huge avalanche heaps. The crust skiing window is open, so some fun ski fun can still be had there, as well as cool avy debris tourism.

Don’t be fooled by the dismal dust and debris in the valley. Skiing conditions are fantastic!